Every year I do my best to participate in Austin Fashion Week (AFW) both as a runway photographer and by being part of the AFW "Mash-Up Team Competition" that involves a number of teams (34 this year) who attempt to create a winning fashion image as judged separately by popular vote and industry experts. Each team consists of a photographer, model, make-up artist, hair-stylist, wardrobe designer, and optionally a wardrobe stylist. 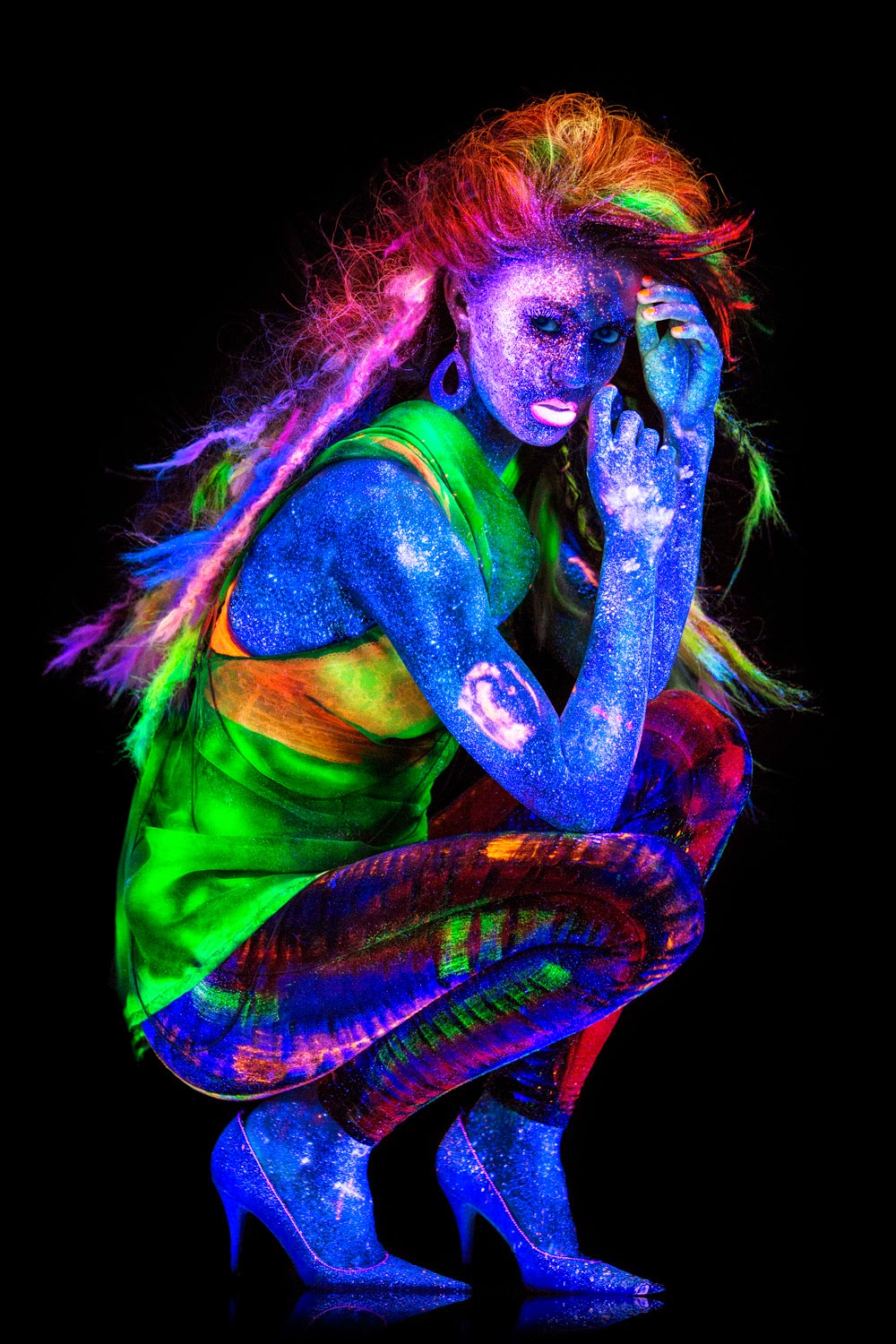 This year we challenged ourselves to produce a compelling UV (black light) image. I think we succeeded, but I'll let you be the judge.
Posted by Unknown at 9:34 PM No comments:

Austin Fashion Week (AFW) kicks off in less than a month on May 3rd and runs through May 11th. I can't wait. Austin is an incredibly creative place, and most of the personal photography projects I've done over the past two years have been with the wonderful people I've met during AFW.

Speaking of wonderful people, Gerry Hanan, an amazing fashion and runway photographer from Round Rock, got me involved two years ago in the AFW mash-up team competition. My team won that year with this image of Britany Walker, whose team one the 2012 competition as well!

In 2011 there were 19 teams. This year there are over 40! I'm looking forward to seeing each team's creation.

Last year I also had the opportunity to shoot the opening night runways. 2012 was the inaugural year for F1 Racing in Austin, so AFW teamed up with the Circuit of the Americas (COTA). Ross Bennett's COTA Girls Collection was the highlight of the opening night.
Here are a couple of the other creations on the runway that night:

I also shot the Wednesday night showcase event at the Driskill Hotel on behalf of Bella Salon and Spa. Bella did the hair styling for the models that night:

Again, hat tip to Gerry Hanan. Gerry does amazing runway photography, is one of the nicest guys in the world, and was kind enough to give me a few pointers on how to shoot runway images.

Recently I had the awesome opportunity to do a beauty shoot with my make-up artist friend Adrienne Pitkin and her hairstylist friend Liz Nevin. Liz brought Cassidy Burke along to model for us and Adrienne brought Stacey Storey, former Miss Alaska to model as well. Our goal was to produce a set of beauty shots that we could all use in our personal portfolios. (The final images for both Cassidy and Stacy are available on my SmugMug site here and here.) I learned a couple of things during that shoot that I thought I'd pass on.

First, standard lighting for a beauty shoot involves putting the main (or "key") light directly above the model and another light, or reflector, below to fill the shadows below the model's chin. I choose to use my Alien Bee 800 in a beauty dish as my main light and a reflector as my below-the-model fill light. I found that using a ring light (a light that wraps around the camera lens) for additional fill was also very helpful. The combination of all three lights produced very flattering light on the models' faces. On some of the images I also used rim lights (lights behind the model on each side) to separate the model from the background. I have mixed feelings about the rim lights in some of the images. Next time I'm planning to try using a simple hair light instead.

Second, I realized half way through the shoot that I needed to work with the two models in very different ways. Cassidy is an experience beauty model. Working with her was largely about getting out of her way and letting her do her thing. All I had to do was throw out a few suggested expressions every now and then and she did everything else. Stacey, on the other hand, is more of a actress. Working with her was more about drawing out her personality than it was about getting classic beauty portraits (although we did that as well). Once I realized I was working with two significantly different models, I started producing much better images. I experimented with Stacey's lighting a bit more as well. For example, I let the rim lights peek out from behind her in some of the images giving those images more of a "hollywood" feel.

I recently had a chance to shoot with Madison McCurdy in Saint Louis. It was a productive shoot from both an image creation and educational point of view. Here are a few things I learned ...

- Be Prepared: I've never been to Saint Louis, so I spent an hour before the shoot finding some great locations and visualizing how I might use them to photograph Maddi. Knowing where we were headed from one shot to the next made for a much more fun, relaxed, and productive shoot.
- Keep the Conversation Going: The best photographers know how to draw the best out of their subjects by maintaining a dialog with them. On this shoot I made a point to keep a dialog going with Maddi while also thinking about lighting, camera setting, where we'll shoot next, etc. It helped.

- Experiment with the Light: One thing I wanted to try was using a light right next to the lens as a fill light (to control shadows). I'll have another post specifically on this subject, but learning how to control shadows is an important step next step for me. I'm happy to say that the photo above won the Timothy White Award for Best Mash-Up Team Photograph at the 2011 Austin Fashion Awards held at the end of Austin Fashion Week! Timothy White, a fashion and celebrity photographer, choose the image from 19 others and presented the award to my team at Saturday night's awards ceremony at Austin's Moody Theater, home of Austin City Limits. All 19 teams are chosen at random and tasked with creating a stunning fashion portrait.

Winning an award was a great, but weird, experience. As a photographer, I'm use to being behind the scenes putting other people in "the light", not being in it myself. I have to admit though, it was nice winning the award, especially in a team setting. ;-)

As nice as winning was, creating the photo with my team was even better! I love working with a team of talented people to create beautiful images. My team (we called ourselves "Wild Horses") consisted of:
Thanks to Matt Swinney of Launch 787, the creator of Austin Fashion Week, for putting together a great competition and a great week of events! Oh, and I'd also like to thank Gerry Hanan of Hanan Exposures Photography for telling me about the mash-up teams. I'm very glad I got involved.
Posted by Unknown at 8:37 PM No comments:

I really love the Film Noir genre with its high-contrast black and white images and crime-drama feel. I've been wanting to shoot some Film Noir images for some time now, but various issues kept getting in the way. I finally pulled it together this past week with Ashley, Giovanni, Megan (Giovanni's girlfriend) as the models/actors and two fellow photographers, Alex Suarez and Jake McKee, as assistants. The six of us had a lot of fun with it, and the images you see below are the result of a team effort:

My goal was for the models to act out a few simple scenes that I had sketched out in my photo notebook. Everyone added their ideas, which made for much better images. The thing I like the most about photography is working with other people to create interesting and beautiful images.

We started shooting at about 7:30pm in this amazing alley in downtown Austin. The alley is a throwback to Austin's past, and looks like something out of a movie set. It's full of interesting textures, and is adjacent the Front Bank tower, one of Austin's newest and most modern buildings.
Here are a few more from the same shoot:

Posted by Unknown at 8:30 PM No comments:

Having Trouble with your Light? Just Ask Joe McNally for Help

Joe McNally helped me fix the light the light in this portrait. He was actually holding the umbrella above the model (more on that below) when I took this shoot. I believe that means I can say "Joe McNally was my photo assistant." Yea, right. ;-)

In case you don't know who Joe is, he's one of the best photographers in the world. He's shot for National Geographic, Sports Illustrated, and Life magazine to name a few, so he knows how to light a photo. Here's how I happen to get his help lighting Evelyn ...

So yesterday I, and approximately a bazillion other Austin photographers, attended David Hobby's and Joe McNally's "Flash Bus" tour at the Palmer Event Center. It was a blast. Like Joe, David is a world-renowned photographer and is famous for is "Strobist" blog that has helped many a photographer learn how to use small flashes off camera (me included). Joe and David spent the day teaching us Austin photogs more of their methods.

There's nothing like trying something yourself to really learn it, so after the seminar, a few of us photog-nerds when outside to practice what David and Joe were preaching. My friend Michael Tuuk brought along his daughter Evelyn to model for us. Given her dark skin, I was struggling with how to light her. Here's one of my attempts:

Right about the time I took this photo, Joe and David walked out of the building on their way to dinner, so I asked Joe for his help. He was great, and quickly identified what I was doing wrong:

Second, the fill light I was using wasn't doing much, if any, good from camera right, so Joe recommended bringing it under the umbrella to fill in the shadows on her face. Bingo. 90% of the lighting problems in this photo are solved (see the final photo at the top of this post). It could still use a bit more work, but it's at least usable ... thanks to Joe.

Stay tuned for a few of the lighting tips I learned from David Hobby, including how fill light is key to allowing you to create and use more interesting light ...
Posted by Unknown at 8:25 PM No comments: